Ionospheric Phenomena are of great importance for the development of modern technologies, like GNSS and Radio Communication. This project aims to build up the knowledge regarding the behaviour of the ionosphere and the development of geolocation. This project is pilot environment for future deep space missions, consisting of studying a very complex set of CubeSats in formation flying. Also, different topologies for the space weather mission and the geolocation mission will be investigated. A third area of study is the development of a geolocation instrument. The ITASAT-2 project has main and supporting partners. Main partners are responsible for the project deliverables and must report to the Implementing Technical Subdirectory of DCTA. The main partners are ITA and TECHNION. In addition to a managing work-package, the project has also work-packages related to the NASA project management and systems engineering lifecycle.

The ITASAT-2 project plans to design, build, test and launch three 12U CubeSat observatories to study the ionized particles and magnetic fields in the ionosphere and to produce geolocation. The on-orbit observed ion movement and radio frequency scintillation will be used with Brazilian ground-based observations to allow the creation of scintillation prediction tools. Ionospheric structures, known as plasma bubbles, are the primary source of radar reflections in the equatorial F-region. The ITASAT-2 observatory will study the ionospheric state that gives rise to these plasma bubbles and how these bubbles relate to radio scintillations. The geolocation will be obtained by triangulation of the signals received by the satellites.

The ITASAT-2 project is not the first orbiting observatory to study the ionospheric structures known as plasma bubbles. Four other missions collected in-situ data; (1) San Marco, (2) Communications/Navigation Outage Forecasting System (C/NOFS), (3) Republic of China Satellite 1 (ROCSAT-1), and (4) Defence Meteorological Satellite Program (DMSP). San Marco and C/NOFS experienced aliasing due to low inclination orbits. ROCSAT-1 and DMSP experienced infrequent plasma bubble occurrences due to the high-altitude orbits, and a scintillation correlation was difficult due to the convolution of longitude and local time. 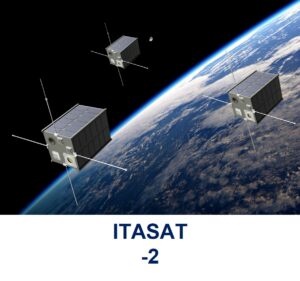 The project proposal comprises the development, assembly, integration, and test of three 12U CubeSats. These CubeSats will be later inserted in orbit and operated for two years.

Since 2019, when the Brazilian Government made the decision of send a delegation of the Brazilian Air Force to Israel, both ITA and Technion have engaged significant effort on establishing a long-term research collaboration in Space Research. The joint activities performed so far include the organization of a workshop, participation of ITA professors and students in the discussion of technical subjects with Technion, such as CubeSat propulsion, the implementation of a geolocation strategy, and the development of join research projects. Among all these activities, we highlight the projects that are related to this SoW: